Time to Stir the Pot!

Posted on October 24, 2013 by anthonyhayshop

Introducing our volunteer, Oscar Wells, a longtime woodworker who helps us here in the shop two days a week.  Of late, he has been working to complete the dressing bureau featured at the Mount Vernon Symposium in 2012.  Here, he has contributed a brief post on the decisions about color and varnish on the piece.  Thanks, Oscar, for all your help and knowledge and comradeship!

The topic of finishing always stirs up a good discussion, so I might as well stir the pot.  I have been in the process of preparing and applying a finish to a replica of one of two bureau dressing tables that Peter Scott originally completed in lieu of a year’s rent for his Williamsburg shop space, which was owned by Daniel Park Custis. After Custis’s death the pieces followed his widow, Martha, into her new marriage to George Washington.  The original Bureau Dressing Table is the property of George Washington’s Mount Vernon and the curators there were gracious enough to allow us to study it and fabricate a replica for our conference on Working Wood in the 18th Century – The Furniture of George and Martha Washington in 2012.  Since then, the piece has been waiting at the shop for someone to have the time to start finishing it.  Once completed, the desk will become part of our ware room here at the Anthony Hay Cabinet Shop and will be available for those of you who visit and wish to examine it in detail.  An excellent article on the furniture of Peter Scott, which discusses this piece specifically is found in the article by Ronald L. Hurst, “Peter Scott, Cabinetmaker of Williamsburg: A Reappraisal”  in the 2006 issue of American Furniture published by the Chipstone Foundation.

With the dressing table sanded and ready for finishing, guidance was provided by our conservation staff.  The preference of that time was to have the mahogany stained with a reddish organic dye stain using  either logwood or brazilwood coloring. This would be followed by a minimal application of orange shellac or a light kusmi seedlac of one or two coats.  I prepared a strike-off sample of logwood and brazilwood on the same mahogany used in the dressing table. Single and double coats of each of the stains were followed by an application of alum as a mordant to make the stain more permanent.   Seedlac was then applied after drying.  The two coat sample of stain resulted in a dark red color, while the one coat sample of brazilwood displayed a bright red and was chosen as most representative of the period.  The logwood produced a very light red color and was discarded from consideration.  The seedlac toned down the color to a rich reddish-brown color typical of the period.

Brazilwood-stained door beside unstained case side. 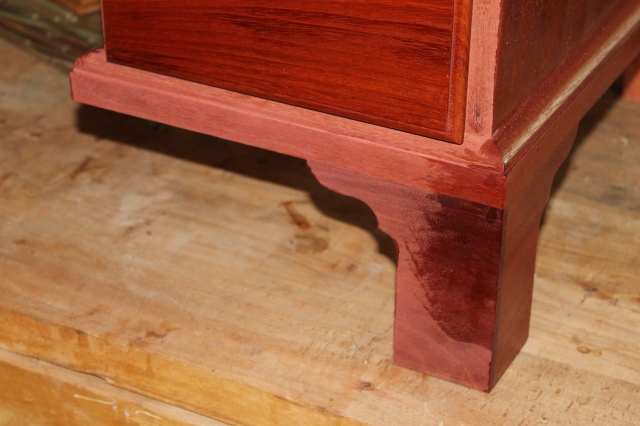 A 1 ½  pound cut of light kusmi seedlac was then prepared and one coat was initially applied with a brush for a faster build on the base.  Following this, several additional coats were padded on to the dressing table and drawers.  A future post will cover the completion of the finishing process. 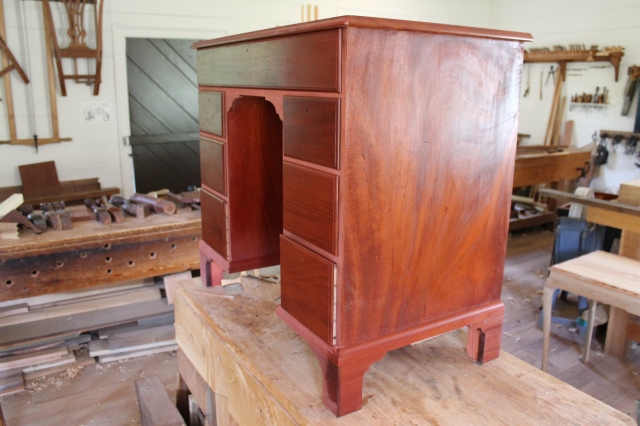