Posted on February 27, 2011 by anthonyhayshop

The front rail and left cheek of the spinet are on. 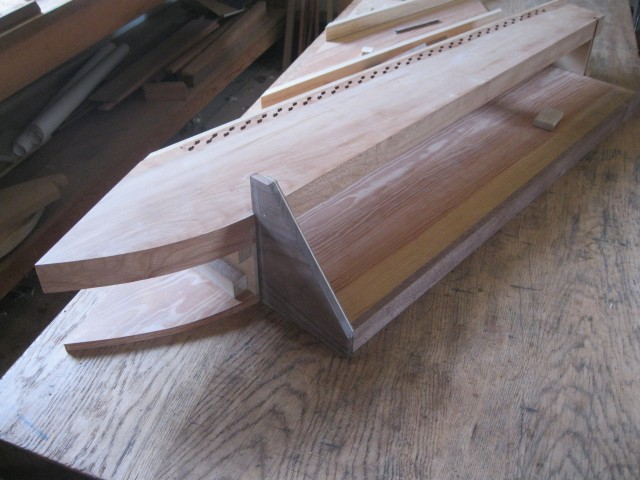 The attached cheek and front rail

Thus begins the assembly of the outer case walls. Further inside support bracing will follow, once the walls are up.

The front rail is a single walnut strip glued and nailed to the edge of the pine baseboard. The ends were left proud and then cut flush with the left and right baseboard edges. That was the easy part, compared to what came next.

I had decided to lap the front edge of the cheek over the rail’s end.  It is a common approach in old spinet joinery since it limits exposed end grain and gives a cleaner look. Doing so added a complication. 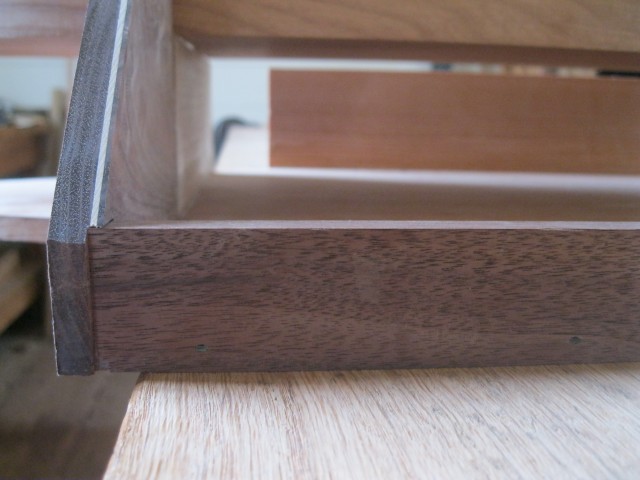 Forward View of the Corner Assembly

The cheek has walnut crotch veneer on its inner face (the one toward the keyboard area). The solid walnut core had to butt against the baseboard and rail end directly, so I had to cut away the necessary portions of veneer to bring the contact surfaces together, as shown here (the picture is of the right cheek, still unattached as yet, but treated the same as the one now attached). 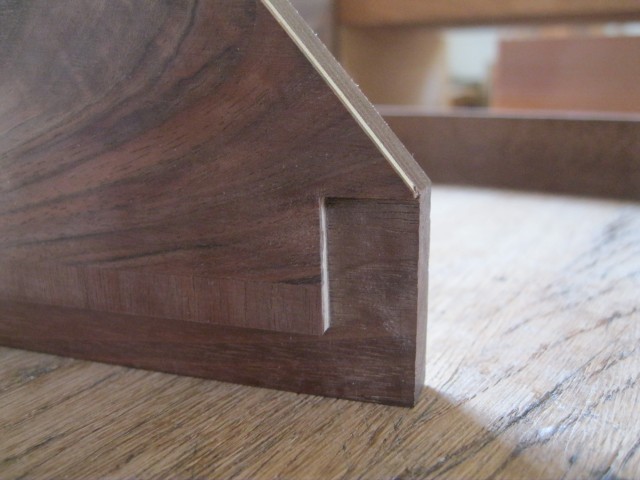 While this may appear cumbersome (and it was!), I felt it was better to veneer most of the cheek surface to guarantee solid adhesion, then mark directly from the front assembly the portion needing removal and off I went trimming away. The edge of the remaining veneer would overlap the top of the rail, as here: 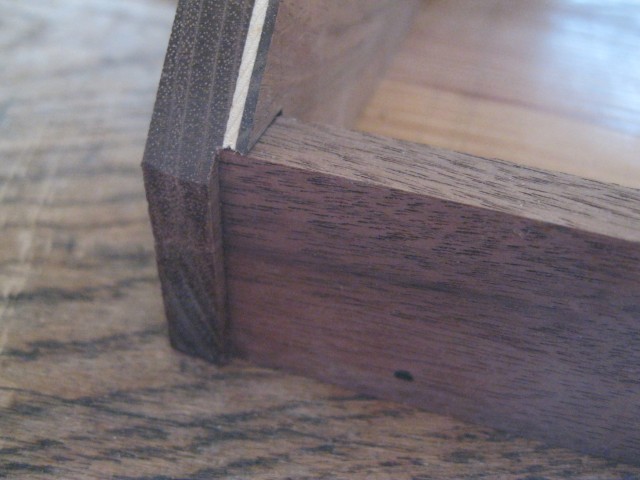 Closeup of the corner. Note the overlap of the veneer onto the rail.

The cheek also fit into a vertical dado cut into the beech wrest plank and its support block, also a period spinet joint. The end grain of the baseboard and rail was sized with thinned hide glue. After a short interval to let the sizing set, fresh glue went on all contact surfaces (thanks, Bill, for your assistance). The cheek slid down the dado, into position. Two small nails secured it to the baseboard and rail. 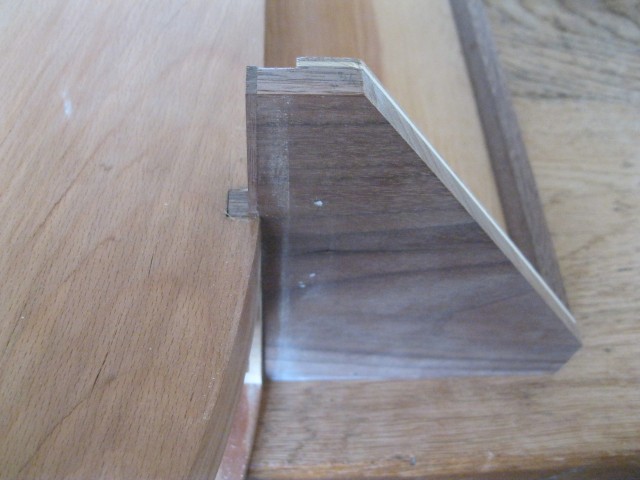 Note the dado joint in the beech plank. 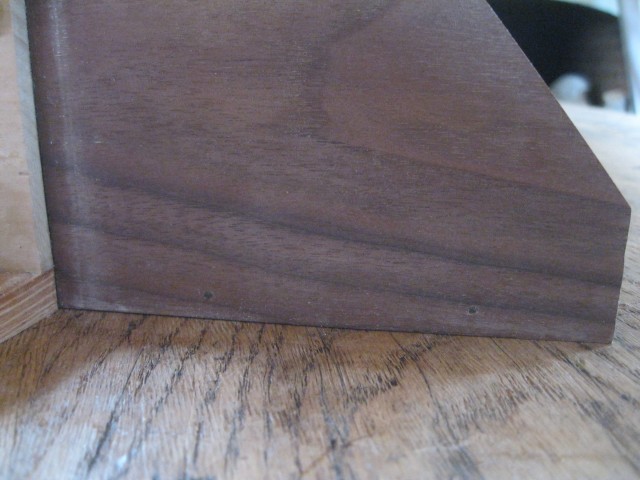 Note the two small nails along the lower edge.

I left the front edge of the cheek proud, later to be cut back flush with the rail’s face.

You may have noticed a very slight gap between the overlapped veneer and the top of the rail.  It will be covered by thick crossbanded cap veneers glued to the rail top and butting against the cheek. The top edge of the cheek will also receive cap veneers.  The gap on the inside, behind the rail, is of no concern. It will be unseen since the keyboard assembly will mask it, so there was no reason to fuss that fit. 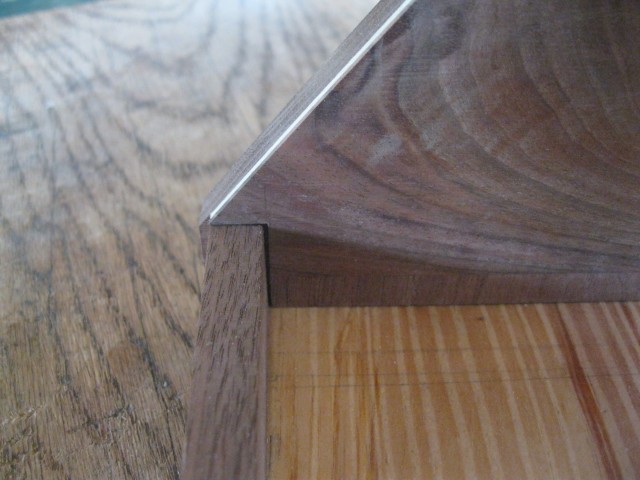 The irregularities will be either covered with veneer or, if unseen, left as they stand.

Next up: the long spine along the spinet’s back and the left curved panel that will butt the cheek and lap over the spine. 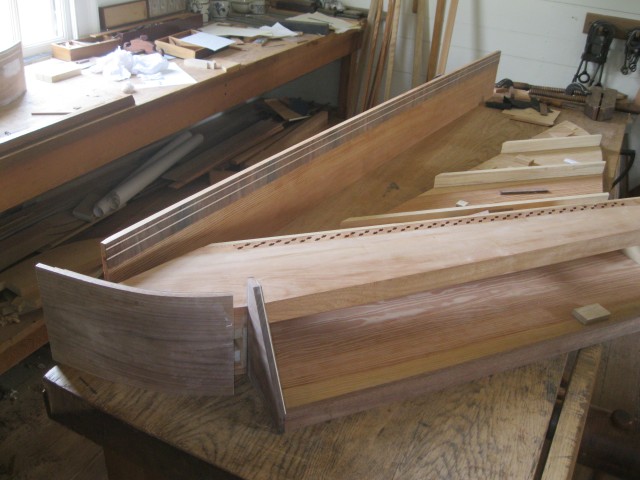 The spine and left panel, in context for future assembly.

This entry was posted in Harpsichords and Spinets. Bookmark the permalink.