Posted on January 10, 2011 by anthonyhayshop

Welcome to what we hope will be the first of many blogs about life as 18th century cabinetmakers in the 21st century.  We plan to use this site as a means of sharing our woodworking and research experiences with you through words, photographs, drawings, and videos.

In lieu of personal introductions, we thought a brief introduction to our humble – though hardy—workbenches might prove to be of more interest.  Often visitors to the shop ask if we have plans available for building a bench.  This is what we give them: 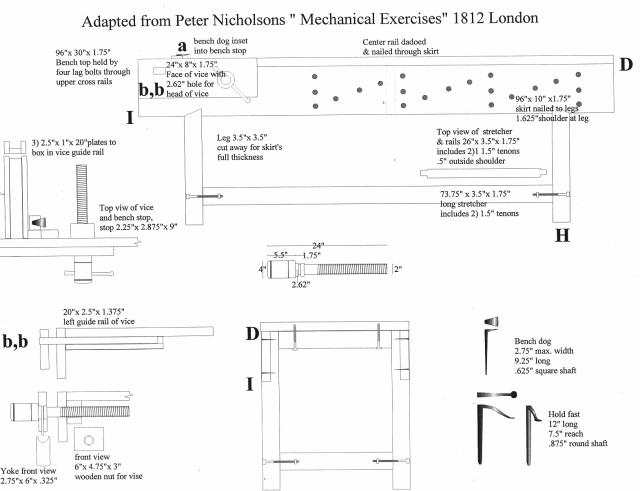 Our Version of the Nicholson Pattern Bench

Taken from Peter Nicholson’s Mechanical Exercises (London:  1812), this bench will be familiar to many of you as what is often termed an “English joiner’s bench.”   Indeed subtle variations of this design turn up in trade treatises and paintings through the 19th century.  In fact, George Ellis, in his 1902 book Modern Practical Joinery (a reprint is available through Linden Publishing), illustrates and recommends a bench very similar to Nicholson’s.   But to delve further into a search for precedent for our use of these benches would be a bit odd since we are American cabinetmakers of the 18th century, not English joiners of the 19th century.

Simply put, our use of this design is conjectural.  There is a dearth of written, iconographic, or material evidence about 18th century Anglo-American workbenches.  How different was an early 19th century English joiner from an American cabinetmaker of an earlier generation?  Quite different, though in terms of bench use, the differences are slight. The issue of nationality is really of little significance in this case.  The workmen of the Hay shop were either of British birth or trained by someone who was.  In essence we were a British cabinet shop an ocean’s breadth away from home – locating the places where colonial practices diverged from English norms will be a recurrent theme over the course of this blog.  We are comfortable with pulling these benches back into the 18th century because of the great continuity that existed in hand work over this period.  To be sure, there were many radical changes over this time, but the typical joiner or cabinetmaker was still starting his work from the same point: a rough sawn board that needed to be made flat and true with hand planes.  We essentially perform the same operations on our benches as joiners, albeit at a different scale.

So then, in terms of history, we are comfortable – though not overly confident – with our bench selection, but as workmen we all feel quite at home with this incredibly simple Nicholson-inspired design.  There are eight workbenches snugly fitted into our 24’ x 32’ shop space, one for each of us (our Harpsichord maker gets two and there’s one for our volunteer).  Most of them hover around 8’ in length, though our front display bench is an impressive 12’ (this is truly a joiner’s bench for long moldings etc.).  In truth, most of our work could be accomplished in 6’ of length as it’s not uncommon to find the tail end of the benches piled high with clutter.  They range in depth from 23 1/2″ to 30” and their heights vary according to the workers personal preference.  At 5’10”, I prefer my bench at 33” in height, which allows for a lot of power in planning, but is also tall enough to make detail work comfortable.  Were I a joiner I’d probably prefer something a bit lower.  As for the wood, they are made from a variety of species (oak, beech, maple, and long leaf yellow pine for the tops and skirts and oak or pine for the legs).  The key here is finding a good combination of durability, local availability, and low cost. 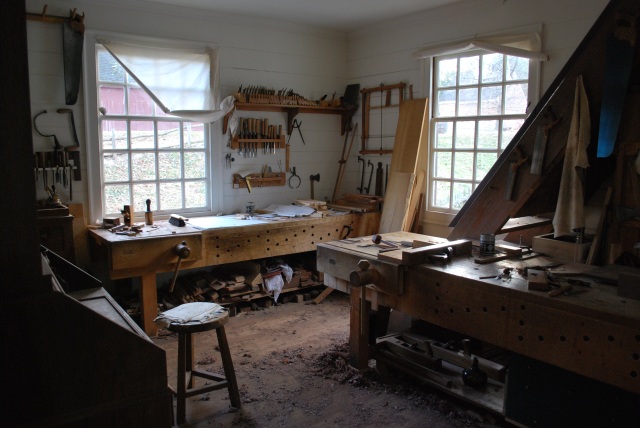 One of the most distinguishing features of our benches is their lack of a tail vise and its associated line of dog holes in the bench top.  Rather than viewing this as a limitation, we tend to find the benches quite flexible in terms of their use.  With only a face vise, a skirt riddled with hold fast holes, and a simple retractable planing stop, each of us can exercise a considerable amount of creativity in finding the best way to hold a given piece for a given operation.  In this way there is a very organic relationship between the user and the bench.  Unfortunately such organicism also applies to the bench’s relationship to the shop itself: they tend to grow together, so much so that most probate inventories for 18th century cabinetmakers don’t list workbenches at all – they were simply viewed as part of the shop structure itself (they were often built-in units).

There is one bench in the shop not based on Nicholson’s plate.  The bench below is modeled after one that belonged to the Dominy family of woodworkers and clockmakers from East Hampton, NY (currently on display at the Winterthur Museum in Delaware).   Our take on this design features a massive maple slab for the top (3 ¾” thick) and a sliding deadman takes the place of the wide skirt for use with holdfasts.  While the Dominy bench has a substantial twin screw vise, ours is furnished with a single screw. 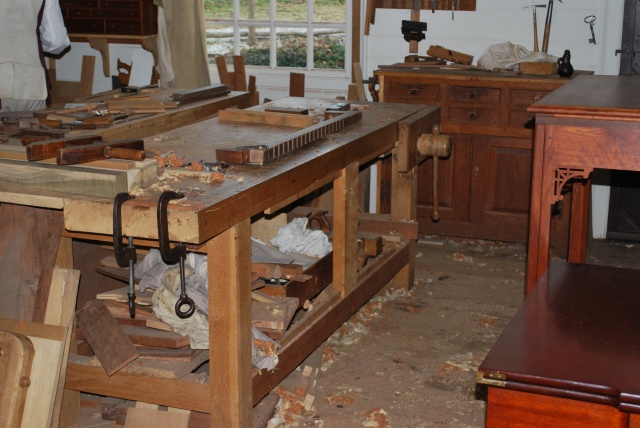 Our bench inspired by the Dominy Shop

In future posts we’ll touch on the many ways we’ve come to employ these benches in our daily work as well as some thoughts on their maintenance.  Their versatility has given rise to great variety, with each of us finding our own particular ways of adapting them to our individual styles of work.

40 Responses to Greetings and Workbenches